From the creators of the Serta Perfect Sleeper mattress, the Serta AIR Health and Wellness Executive Office Chair purports to be an innovative and stylish, ergonomically designed, luxury desk chair. It claims to eliminate strain on the lumbar region, to reduce leg pressure and to aid in blood flow to the legs thereby increasing focus and decreasing fatigue. The chair features Serta comfort technology, bonded leather, and easy height adjustment controls. It measures an adjustable 42.75″- 46.5″ high, 25.75″W x 29.75″D and sits atop 60 mm casters designed for any surface floor. The AIR Lumbar Technology pivots with your body to provide maximum support and improved posture. 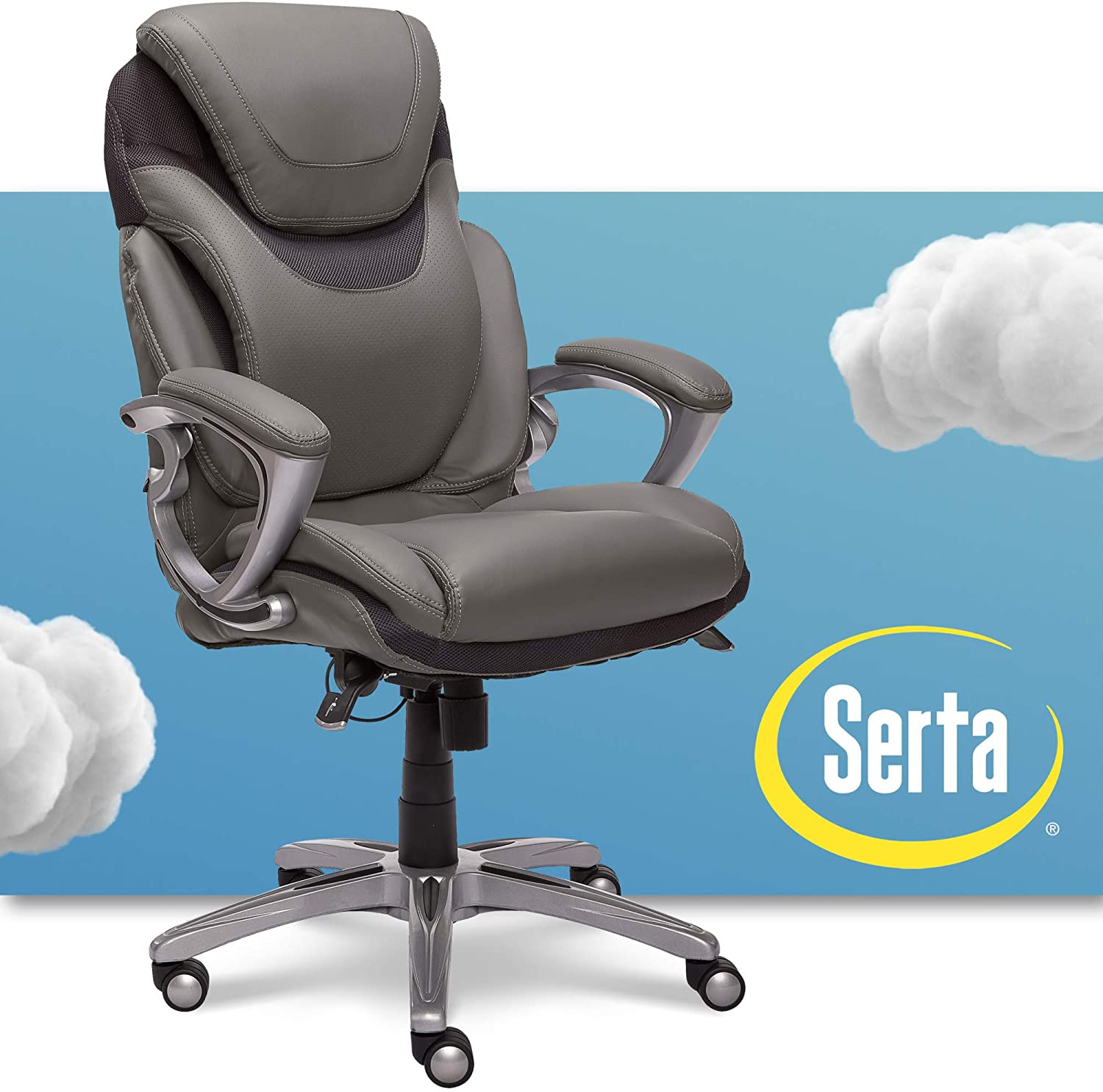 In the two star or less reviews, many of the same issues were repeated, and generally fell into the categories of quality, craftsmanship and durability. Claims included: arrived damaged from factory, missing pieces that took too long to replace, pieces not lining up during assembly, upholstery fabric feels cheap, does not have Serta branding, pneumatic height adjuster breaks, did not last as long as expected, generally uncomfortable. Most did comment that it was easy to assemble, taking 20-40 minutes. Many felt that it was overpriced. Several lamented not doing enough research. 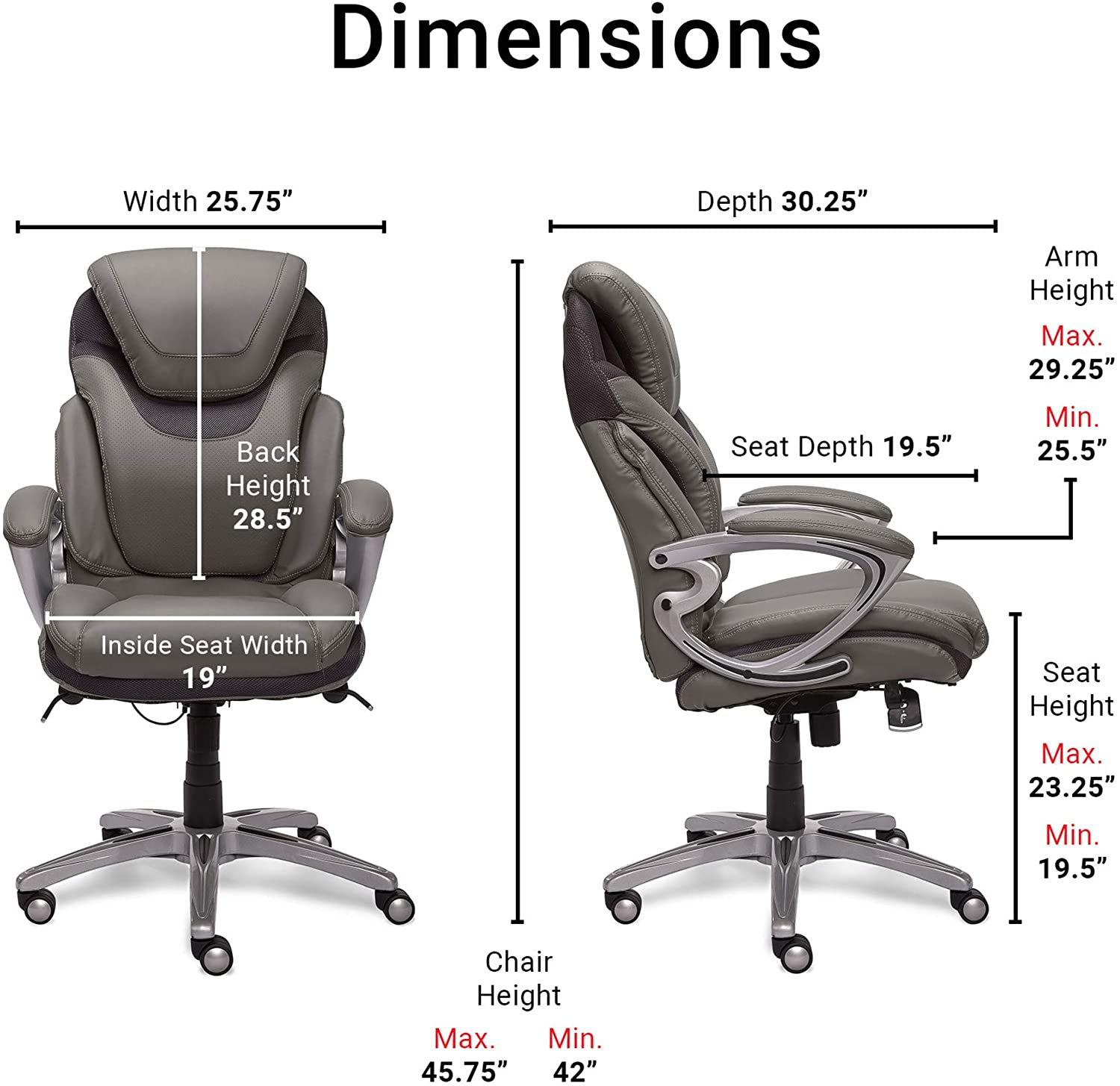 The three star reviewers don’t love it and don’t hate it. It functions for their needs, but it did not meet their expectations. Generally the complaints were about comfort and quality, as in the two and one star reviews. The positive points included the appearance. The quality complaints were similar to the lower star reviews- missing or damaged parts. Many liked the style and felt that it completed the home office “look.” Most had positive feed back for assembly and customer service. Some felt that it was expensive, some felt that they should have purchased a more expensive alternative.

Most of the people that gave this chair high reviews did a considerable amount of research before making a choice. They knew what was on the market and this chair met or exceeded their expectations. They particularly found it comfortable and pleasing to the eye. Some had difficulty with assembly, but very few received damaged parts. The price and quality met their expectations for a mid tier product.

Throughout the one, two and three star reviews, quality was a repetitive issue. Some customers found the boxes had been damaged in delivery, but most felt it was a quality control issue. Most of the people that received it with damaged or missing parts, contacted Serta for replacement parts which arrived after a week or so. Others simply exchanged it for a new one if the wait for the part was longer than two weeks. The arm rests, in particular had an extremely long wait time, which is not surprising, as many complaints were directly related to them. A few had mis-manufactured parts that did not slide into place easily, but they forced it to work. A few complained that the paint was poorly applied and gritty or chunky.

Almost all of the four and five star reviewers received merchandise in perfect condition with all necessary parts.

Overall comments on Serta customer service were positive, including quick response time and friendly associates. A few had extended wait times. Several were disappointed that replacement parts would take more than a week to arrive. A few were not sure if they should contact Serta, Amazon or the third party company that listed it. In the end, if they wanted a replacement part, they worked with Serta. The few that returned or exchanged it, found the process to be low hassle.

Complaints about craftsmanship relate to texture of the upholstery fabric, the feel of the molded plastic and the general manufacture of the parts. Many complained that the fabric was pleather, not leather and that it carried a heavy scent. The fabric is described as bonded leather, which is a manufactured product that includes animal hide, but is different than real leather. It clearly states that it is upholstered with faux leather. These complaints have more to do with consumer education and expectations than the actual product.

Several questioned if the chair was a genuine Serta product, as it lacks the Serta emblem anywhere on the chair. Many stated that it was only printed on the box, not the chair. Others complained that the plastic “felt cheap and flimsy” and that the cushions were not thick enough.

These comments were primarily in the one and two star ratings only. The four and five star ratings found little or no issue with the craftsmanship

Durability was mentioned at all levels of review. A few four and five star reviews did not expect the chair to last more than a year. The could feel the arms or legs wiggling or wobbling. Quite a few of the negative reviewers had the chair for a year or less, and they already had issues with parts breaking. The two most common breaking points were the pneumatic cylinder that controls height and the arm rests. There is a one year guarantee, and those that pursued replacement parts received them. There were also complaints about the cushions and the lumbar AIR support deflating or flattening. Some felt support bars and wires through the padding after a year. 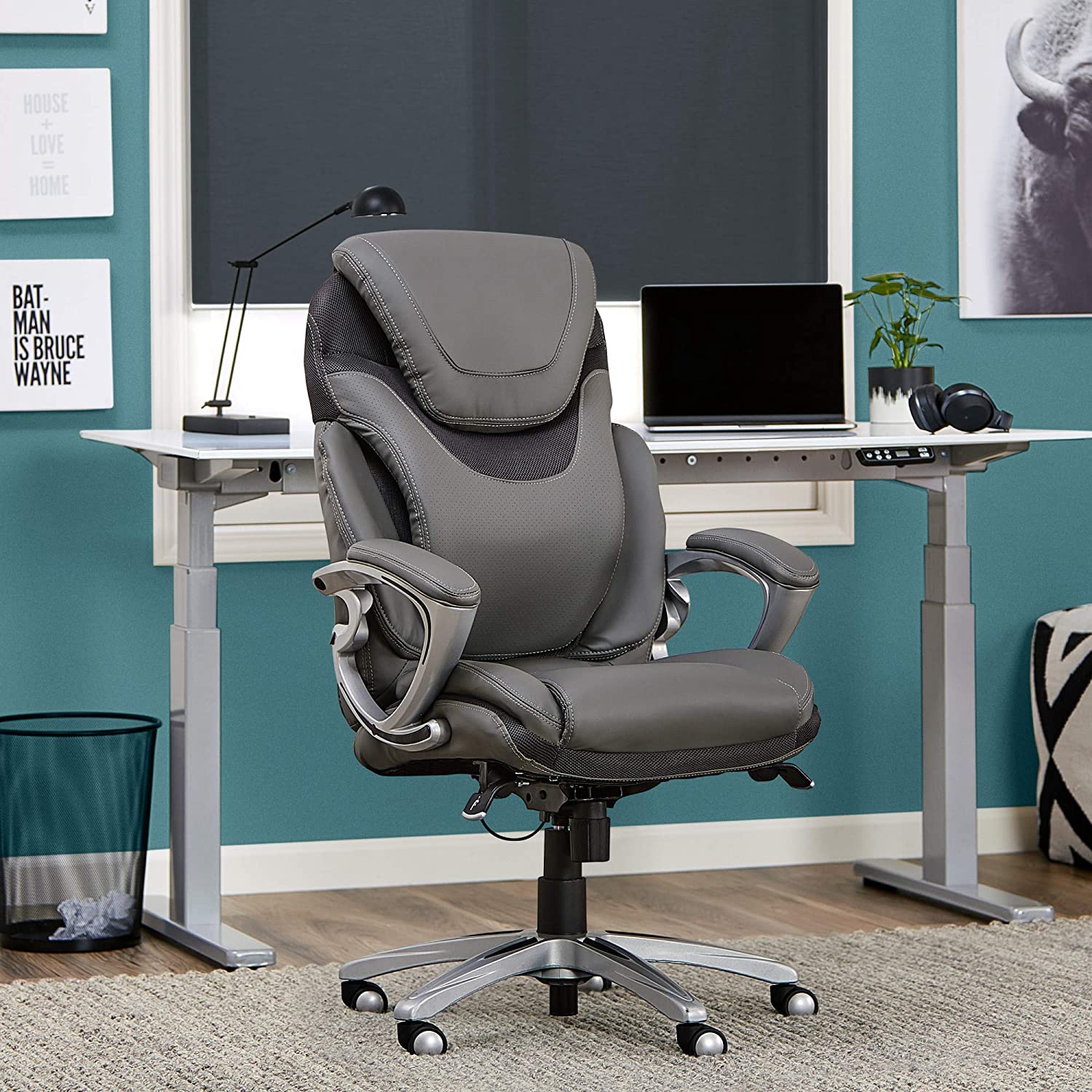 Comfort was very closely related to customer height. Those 5’10’ and above found it to exacerbate back and leg pain. People with long legs or over 6′ felt that the chair did not support the full thigh and that they were sitting on the edge. The head rest was too low to be used. Some also complained that the seat was narrow, so not as enjoyable for a wider person. These comments were all rated three stars or less, and most of the respondents had not sat in the chair before purchasing it.

A few, mostly in the three star reviews, found the comfort level passable. It did not improve posture or existing back pain, and it did not make it worse. They found the lumbar support too low or too full, or they could not comfortably lean or rock in the chair. They also found the arms too high or too low.

Quite a few found it to be extremely comfortable, but they were 5″6′ or shorter. The lumbar support was exactly in the correct location and they found it difficult to slouch. Many reported improved posture. There were far more mentions of the chair being comfortable than not. Most of these comments were in the four or five star category, and they were extremely happy with the chair. Many of the customers that found it extremely comfortable also worked long hours in the chair, or had severe back issues.

Aside from a few comments in the one and two star reviews, almost everyone liked the chair’s appearance. They liked how it completed the home office appearance and how it did not take up much room. It was described as sleek and cozy.

As with any product, it is wise to do full research before making a purchase. Learn the terms used to describe the features, and learn to read between the lines of reviews. Read the description carefully, and investigate more than one product. If possible, view and touch the product in person. The most satisfied customers were the ones that knew exactly what they were ordering. The most disappointed were the ones that misunderstood the description.

One of the most important deciding factors for the Serta AIR Health and Wellness Executive Office Chair, is the size of the customer. Based on the reviews, the ideal consumer is 5’6″ or shorter. Serta makes larger chairs, so anyone taller than 5’6″ might find a better fit in a different model with similar technology. For people between 5’6″ and 5’10”, it may or may not work. This group, in particular, should attempt to sit in an assembled chair before making the purchase.

There were a large number of customers that were shipped chairs with damaged or missing parts, and many complaints about parts that did not fit together easily. This does bring into question the durability of the product, and this sentiment was echoed throughout all the reviews. If the consumer is comfortable working with customer service if the parts do not arrive as expected or if they break before the warranty expires, then it may be worth the risk. Customer service is responsive, and easily ships out the replacement parts.

Overall, this seems to be a sturdy and nice looking office chair for the price, if you are 5’6″ or shorter.

AmazonBasics High-Back Executive Chair: A Real Value for the Dollar